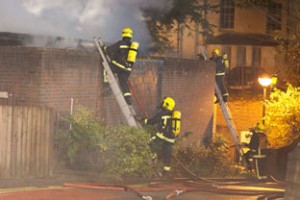 A fire broke out in a building containing an MRI scanner at about 4pm on Friday, and quickly took hold. More than 50 people from the accident and emergency and intensive care units were evacuated as the fire threatened to take hold of the main hospital building also.

Over 100 firefighters in attendance were able to quickly coordinate their response, preventing the further spread of the fire.

Ambulances bound for theWinchester hospital were diverted to Southampton and Basingstoke hospitals and the A&E department stayed closed for over 24 hours.

Dan Tasker of Hampshire Fire and Rescue described the fire as “very unusual” in nature, due to the magnetic field of the MRI scanner.

Fire crews have so far been unable to determine the cause of the fire as they are still waiting for some helium gas to be released from the scanner. The site is not expected to be made safe for another 72 hours.

Officer in charge, Mike Crennel, praised the responsiveness of hospital staff and his crews.

“The crews worked extremely hard in their initial attack on the fire.  Due to the swift action and coordinated approach the crews were able to prevent the fire spreading to the rest of the hospital.

“The hospital did a fantastic job with evacuating people quickly and safely which meant no one was hurt.  This would have no doubt been a much more serious incident had it not been for the firefighters who have worked hard in arduous conditions.”