Police are probing the cause of a fierce blaze that destroyed a Bradford curry house. 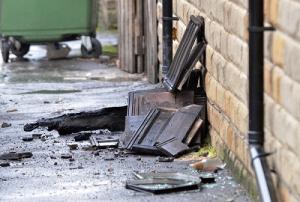 The fire engulfed the ground and first floors of the Taza Grill in Great Horton Road. Detectives are investigating whether there had been an arson attack.

Building owner Tariq Parvez, who was sub-letting it to the restaurant owner, has estimated that £500,000 of damage has been caused to the premises.

Dozens of firefighters were scrambled to the scene shortly after 4am on Saturday. At the height of the blaze nine fire appliances from stations including Bradford, Fairweather Green, Odsal and Shipley were used.

Residents living in four adjoining flats in nearby Sumerseat Place were evacuated after plumes of black smoke entered their homes.

Several occupants were treated for smoke inhalation by paramedics at the scene and an 85-year-old man was taken to hospital.

Mr Parvez, who ran the Chowdrey Ambala Indian Restaurant from the premises until he sub-let the building in 2008, said yesterday: “It is heart-breaking. I cannot believe what has happened. The place looks destroyed and will cost about half a million to put right. Because of holidays we can’t do anything about insurance until Tuesday.

“I have put all my life savings into that place and I hope everything goes okay or I am finished basically. I spent about £800,000 doing it up.”

Mr Parvez said that he was still waiting to find out exactly how the fire started.

“We do not know what happened but the police are investigating and were at the building until 8pm on Saturday. I received a phone call from my brother-in-law telling me there was a fire. The business was closed as normal at 12.30am and hours later it was on fire.”

Terry Burns, who lives in one of the nearby flats, said he raised the alarm after smelling smoke when he got up to go to the bathroom.

“I opened the main door to the flat and smoke came flooding in. I couldn’t see anything. I saw a big fire in the restaurant and called the fire brigade.”

Great Horton Road was closed to traffic between the junctions of Horton Grange Road and Shearbridge Road on Saturday morning while fire investigators examined the scene accompanied by police officers.

It is understood the findings have led to the investigation being passed on to police by West Yorkshire Fire Service.

Last night Detective Sergeant Simon Pridgeon, of Bradford South CID, said his officers were looking at whether the blaze was started deliberately and were appealing for witnesses to contact them.

“It has been passed to us to investigate,” he said. “If anyone knows anything about this incident or saw anything suspicious at about 4am on Saturday they should call us on 101 and ask to speak to Bradford South CID.”

This story was taken from thetelegraphandargus.co.uk click here for the original story