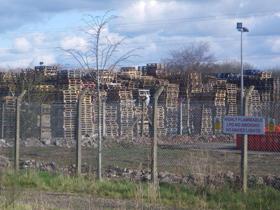 The owner of a pallet manufacturing company has appeared in court after he allowed fires to be repeatedly lit at his premises next to gas storage sites.

Carlisle magistrates’ court heard that Mr Ward was first issued with a prohibition notice in December 2007, preventing wood being burnt in an open metal drum at the site on Willowholme Industrial Estate.

Mr Ward signed a letter in April 2009 which prescribed how fires could be safely lit and controlled at Brampton Pallets, after HSE received another complaint about fires at the site.

But a further complaint was made in 2011 and, when two HSE inspectors visited the site on 10 March, they witnessed another “unsuitably controlled” fire.

Speaking after the hearing the investigating inspector, Steven Boyd, said:

“Mr Ward was given several chances to comply with the law but after repeatedly ignoring our advice, a prosecution was inevitable.

“By allowing unsuitably controlled fires to be burnt at Brampton Pallets, he risked a spark from the fires causing a serious fire or explosion at the gas storage sites next to his business.

“If this had happened, then it had to the potential to cause multiple deaths or serious injuries.”