Arson is suspected to be the cause of a huge straw bale fire that is raging in the Cambridgeshire countryside. 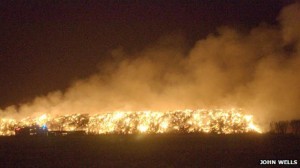 The first fire was reported at Mepal last night and consisted of around 32,000 bales. Later it was reported that a further 100,000 bales were on fire in Witcham. All of the straw has been identified as belonging to Elean power station, and fire chiefs have now described the fire as “suspicious”.

Elean power station is the largest straw burning power station in the world, and the bales were all being stored in fields for later use. Many bales in close proximity to the fire are not yet on fire, and it is a priority to stop the fire spreading at this time.

Smoke can be seen from the fire up to 30 mile away.

Chris Parker, Station Manager for Cambridgeshire Fire and Rescue Service said: “These are very large fires and as with all smoke, it does have a degree of toxicity.”

The fire was expected to burn for several days.

Martin Boome, Station Manager for Cambridgeshire Fire and Rescue Service and Arson Liaison Officer for the Cambridgeshire Arson Partnership said: “The consequences of this fire are huge. People don’t realise the amount of resources that the fire service have to put in place to tackle fires such as these, which are likely to burn for several days.

“In this situation you have a large amount of straw which is on fire, in very close proximity to other stacks which have been unaffected. Firefighters must work day and night to ensure that the fire does not spread and this has a cost implication on the service and prevents those crews from attending other emergency incidents in the area.

“In addition to this, fires like this also have a massive affect on the victim and the local community. I would urge anyone with information to contact the police on 101 or Crimestoppers anonymously on 0800 555111.”