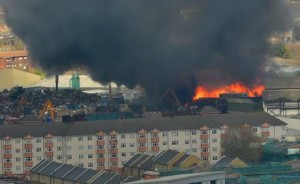 Two warehouses and a pallet yard have been destroyed in a blaze in east London.

Twelve fire engines and around 60 firefighters responded to the fire in Canning Town on 5 April.

Overhead power cables were also damaged by the blaze and this led to power cuts which affected thousands of homes in London.

Part of a scrapyard was also damaged, a van was completely burnt out and a car was partly damaged.

Station Manager Jim Morford, who was at the scene, said at the time of the blaze:

“This is the second large fire to hit the capital in 24 hours. Several calls were received by the Brigade’s control officers from members of the public who could see the huge plume of smoke rising from east London.

“Fire crews are at the scene and are working really hard to bring the flames under control. We’re obviously keen to prevent the fire from spreading to other industrial units.”

The fire service was called at 3.00pm and the fire was surrounded at 5.15pm. The incident was over shortly before 8.30pm.