Croydon rioter sentenced to over 11 years for arson 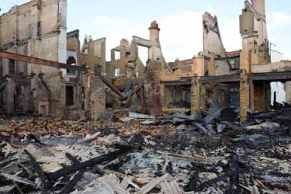 Gordon Thompson has been sentenced to 11-and-a-half years at the Old Bailey after pleading guilty to arson at the House of Reeves furniture store in Croydon during last summer’s riots.

The fire caused an estimated £3m worth of damage and provided some of the most striking images of the disturbances last August, including that of a woman jumping from her flat into the arms of rescuers below.

The blaze was so fierce that it spread from the furniture shop across the street to residential properties.

Sentencing, Judge Peter Thornton said, “This day was a bad day for Croydon and the people of Croydon.

“Perhaps the most shocking event was that the House of Reeves was set alight and burned to the ground, putting lives at risk.

“[The shop] had stood on the site for over 140 years, proudly giving its name to its location, Reeves Corner

“You were about to bring all that to an end.

“This was a deliberate, wilful act of shocking, dangerous vandalism.

“The Reeves family lost their historic business, something they and generations before had lived and worked for all their lives. Their loss is priceless. The trauma they have suffered is inestimable.”

Arson being reckless as to whether life was endangered

Following his guilty plea for arson being reckless as to whether life was endangered at the conclusion of the prosecution’s arguments, the jury were ordered to find Thompson not guilty of two other charges of violent disorder and arson with intent to endanger life.

One of the owners of the shop, Maurice Reeves said that he accepted the apology of Thompson.

Meanwhile his brother Trevor Reeves said In a statement, “The total destruction of the site has been a bereavement to me, I just can’t understand what I have done to make someone do this to me.

“I wonder with despair what my father and grandfather would make of the situation.”

The sentence is the largest sentence to have yet been handed down by authorities in response to the riots of August 2011.