A property developer has admitted starting a fire at a country house hotel where his wedding reception was being held, causing an estimated £6 million worth of damage. 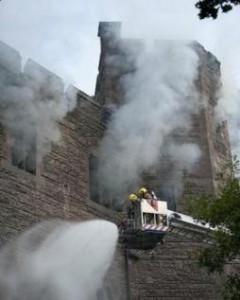 Max Kay, 36, of Hunts Cross, Liverpool, pleaded guilty to arson that was reckless as to whether life was endangered when he appeared at Chester Crown Court on 2 December. He denied a count of arson with intent to destroy or damage property and to endanger life, which was accepted by the prosecution.

The court was told that he had previously had an argument with the hotel’s management over a bar bill.

Duncan Bould, prosecuting, said that a combination of a very efficient fire alarm and the action of hotel staff meant that all the guests were able to be evacuated.

The fire at the Grade 1 listed Peckforton Castle hotel in Tarporley, Cheshire, broke out at around 5.00am on Sunday 19 June. 100 firefighters tackled the blaze which affected three floors of one of the hotel’s wings.

Last month, three members of the hotel staff received a special award for their role in helping to evacuate around 70 guests from the building.

The judge told Mr Kay, who is due to be sentenced on 3 February, that a custodial sentence was inevitable.