A fire has destroyed a building in Huddersfield where a member of the 1966 World Cup winning England team used to work. 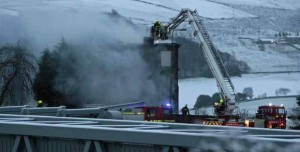 The fire broke out at around 6.15 am on 15 December at a four-storey workshop in Outlane, where former Huddersfield Town and England player Ray Wilson used to work.

The slip road onto the M62 at junction 23 was closed for most of the day while crews dealt with the blaze.

“There are two properties down there – a house and, right next to it, a joiners’ workshop.

“When I arrived there were flames breaking through the roof and all four storeys were on fire.

The workshop building became unstable during the fire, and was due to be demolished for safety reasons. The neighbouring house, which was vacant at the time, was only partially damaged.

Ray Wilson won 63 caps for England, playing left back in the team which beat West Germany to win the 1966 World Cup. He played for Huddersfield Town under manager Bill Shankly.