John recently wrote to “Ask The Experts” to ask “What is 10 Year Testing and Do I Have to replace my Equipment?” 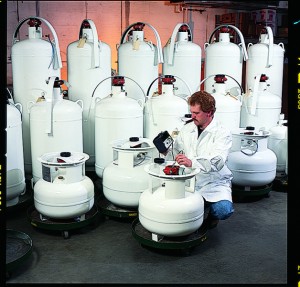 t or gas are pressurised and under EU requirements (see below) all Pressure Vessels must be tested at least every 10 years to ensure they are still safe to use. This applies to all cylinders that are pressurised whether its holding gases such as INERGEN®, IG55, IG541, Argonite, FM200, Novec 1230 used for example in computer rooms, CO2  used in industrial/manufacturing applications or liquids used for Kitchen Fire Suppression Systems or even Portable Fire Extinguishers.

This is because over time a cylinder can rust or joints can become cracked which will make the cylinder less able to withstand the pressures it is used under, which could be up to 300bar. The last thing anyone would want is a cylinder that fails at that sort of pressure, especially if it failed at a time it is needed the most i.e. when you have a fire.

Cylinders must therefore be removed and all gases or liquids decanted. The cylinder is then hydro-statically tested to ensure the cylinder can withstand the normal operating pressures. If the cylinders passes this test, it is stamped with the month and year of testing, it is emptied and dried, the valve is rebuilt and finally refilled with the correct type and amount of agent.

Cylinders are therefore required to be removed and re-tested every 10 years, but because this would cause disruption to the end user, we always recommend that the cylinders are replaced with new or Service Exchange Cylinders. (Service Exchange Cylinders are cylinders that have previously been in use on another site and have been recently tested, refurbished and refilled). This keeps the costs down as having to attend site to remove and then re-install the cylinders after they have been re-tested, along with the costs of decanting, testing, rebuilding the valve and refilling the cylinder in a short period of time would usually be more.

For more information on 10 year testing of cylinders used in Fire Suppression Systems or for a quotation please click here or contact us directly on the telephone numbers above.

INERGEN® is a registered trademark of TYCO Int